The People’s Republic of China is something that rises out of the mist of culture, cradle, and communism in the mind of every history buff. A constant hurdle imposer to India in the global political framework but a close ally in the rally of “Make Asia Great Again”, I received the opportunity to represent my country among the youth of this country- People’s Republic of China.

I was among the chosen 200 students across India who arrived in China, all decked and dressed, to unfold the extraordinary learning experience of our lives. Being a part of such a huge diverse contingent, I was mesmerized by the level of knowledge the youth of India possesses. Before arriving in China, we were advised to learn about Chinese culture. I read books, blogs, anything, and everything to make myself well versed but no amount of reading can match the experience which I had when I actually visited those sites.

While traveling, the delegates were in awe of the infrastructure and the cleanliness of the roads of the city. I was amazed to see how lane discipline was followed and how proper spacing was maintained by the drivers of vehicles.

Later, we were taken to the Forbidden City. It is a palace constructed by the Ming Dynasty. Its construction started in 1406 and took 14 years to get the full completion. The Forbidden City is a UNESCO Heritage site. Here the infusion of Culture and Architecture can be witnessed at the best.

China is very rich in cultural heritage and having the privilege to observe it so closely is something I’ll cherish throughout my life. The Chinese National Museum gave a glimpse of all the major events that shaped the history and future of the People’s Republic of China.

Amidst all the explorations of the city, we received a lecture by the Professor Yang Xiaoping of the National Institute of International Strategy Chinese Academy of Social Sciences.

The theme of the lecture was- “Building a community with a shared future for Mankind and cooperation between India & China.” In the lecture, Mr.Yang ushered about the era of New Socialism in China also referred to the new guiding ideology of Xi Jingping that coined “Chinese Dream” an equal challenge to the concept of American Dream.

The lecture provided a deep insight into how with the guiding principles of classical Marxism fissioned with the New Era of Socialism and thoughts of Mao Zedong has changed the fortune of Economy of China.

During the delegation, we visited OFO Headquarters in Beijing. One of the amazing things which I found there was, the sleeping rooms. If any of the employees feel the need to take a rest, he can take a nap in the sleeping room. Sleeping pods are put in place there. The major catch here is that one has to work for 8 hours a day with flexible timings i.e. the employee has to put in 8 billable hours at the office.

From art and culture to the technology, China is a country where explorations and awestruck experiences have no ends. While The Great Wall of China is a testament of what human endeavor could achieve, Hubei Provincial Museum hosts the archaeological artifacts of the Chinese emperors and gives the taste of how royalty looked like at this place in the past.

While talking about the technology, nothing could be more mesmerizing than the cars displayed at the Dongfeng Motor Corporation. Dongfeng is a pioneer in manufacturing Hybrid car models. From SUV’s to Multipurpose Utility Vehicles, the needs of all age group have been accommodated. Dongfeng’s self-brand cars are also available which is mainly popular in China. Apart from cars, Dongfeng has its presence in the arms manufacturing industry.

After the visit of the Dongfeng Motor Corporation, we approached the Wuhan Citizens Home. It is basically a Museum that covers the Past, Present and Future aspects of the Wuhan City. The first gallery carries various historical events associated with Wuhan city. One can see all the modern infrastructural development of the Wuhan city through a series of colorful portraits. Timeline for the same is also available therein. Above all the major attraction was the artificial strategic planning center of Wuhan. It is an artificial city model of the Wuhan city located in a large hall type auditorium of the museum. 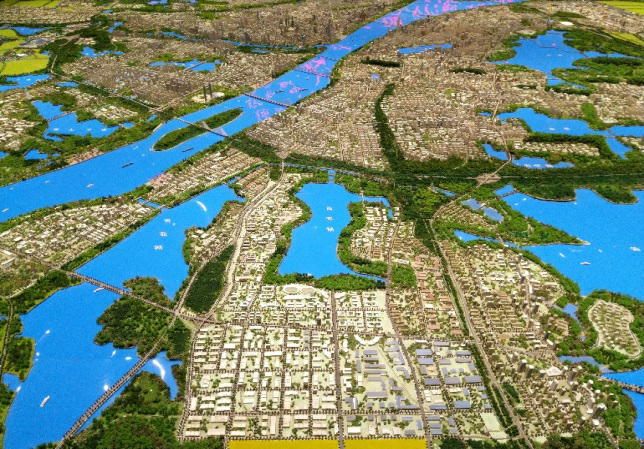 One thing which I noticed in my interaction with people was that the Chinese keep their culture very close to their heart. One of the fascinating things we noticed was the teapots used by the Kings. It was all made from bronze and silver. Ancient Refrigerator was another one. Besides all such attractions, the musical instruments of those periods were the show stealer. We also got the opportunity to watch a Cultural performance which in a way resembles the concert. There the artists produced enormous musical sounds by using various instruments which we had seen in the museum. The show lasted for near about 30 minutes.

We later got the opportunity to explore Shanghai, the city which is considered as China’s showpiece of the prosperity. In my explorations, I feel the most magnificent structure of the Shanghai city was the Oriental Pearl Radio & TV tower of Shanghai. The tower has fifteen observatory levels. The highest (known as the Space Module) is at 350 m. The lower levels are at 263 m (Sightseeing Floor) and at 90 m (Space City). There is a revolving restaurant at the 267 m level. The project also contains exhibition facilities and a small shopping center.

My major takeaways from the Indian Youth Exchange program to China 2018 are diversity at the workplace is very important, it is Okay to fail, always think as a group, thinking out of the box is important and discipline is key to success. Success is no accident. It is hard work, perseverance, learning, studying, sacrifice and most of all, love of what you are doing or learning to do and this is attitude is quite visible in the Chinese population. I believe experiencing and seeing closely everything as enhanced my learning exponentially and has made me understand the country’s culture to a large extent. In the end, I would like to conclude with the famous Chinese proverb, “Tell me, I forget. Show me, I remember. Involve me, I understand”.

This article is written by S.K. Murshed, PGP Batch 2017-19, IIMKashipur